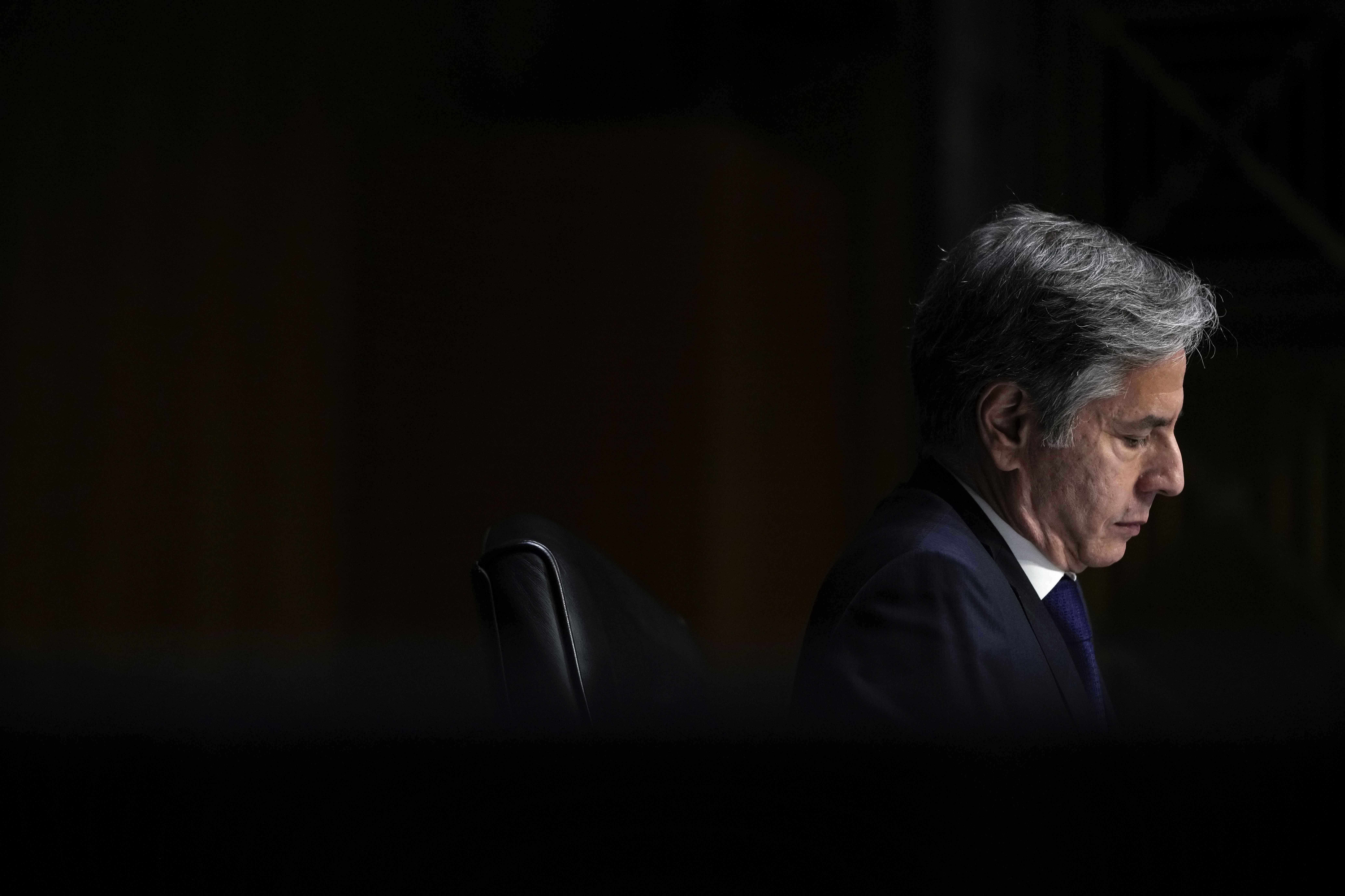 Lenzi has accused the State Department of covering up the source of his and other diplomats’ ailments and withholding information from Congress. Lawmakers were not briefed on the department’s medical tests for directed-energy exposure until early 2021, POLITICO previously reported, even though State was administering those exams to diplomats as early as 2018.

Lenzi provided documents to POLITICO that detail his claims that State’s leadership has retaliated against him for speaking out publicly and for working with the members of Congress who have been investigating the matter.

The federal agency that handles whistleblower claims previously found “a substantial likelihood of wrongdoing” in the case of Lenzi and his claims of retaliation, according to an April 2020 Office of Special Counsel memo. That retaliation probe is ongoing. A separate document shows that just last month, Lenzi’s administrative leave — which he relies on to attend therapy sessions and participate in medical studies — was revoked without explanation.

The documents, which have not been previously reported, shed new light on the government’s handling of the unexplained health incidents that have afflicted more than 200 American personnel — diplomats and intelligence officers alike — in foreign countries and on U.S. soil since 2016.

It comes as victims such as Lenzi have grown frustrated with what they say is the department’s slow and inconsistent response to the incidents over the years, spanning three presidential administrations.

The State Department has been accused of downplaying both the symptoms and the cause — sentiments that were expressed directly to Secretary of State Antony Blinken during a tense September phone call with affected diplomats.

Members of Congress have urged the Biden administration to do more to help victims such as Lenzi, and some fault the State Department for its handling of the matter.

“The State Department has not treated this syndrome as seriously as it should. And that is very disturbing to me,” Sen. Susan Collins (R-Maine), who has spoken with Lenzi and sits on the Senate Intelligence Committee, said in an interview.

“The safety of our personnel is our highest priority,” the spokesperson added. “We take every report we receive extremely seriously, and we are doing everything we can to ensure affected individuals get the best care and treatment.”

In a statement to POLITICO, Lenzi said the State Department’s handling of the issue has deteriorated under Blinken.

“On his first day as secretary of State, Secretary Blinken — who I know and have the utmost respect for — told the Department of State workforce that he ‘would not tolerate retaliation against whistleblowers,’” Lenzi said. “However, under his tenure, retaliation against me by the State Department’s Diplomatic Security Bureau for my whistleblowing activities with the U.S. Office of Special Counsel and with Congress has actually increased.”

Victims of so-called Havana Syndrome have reported an array of debilitating symptoms in what the Biden administration officially refers to as “anomalous health incidents.” The cases were first reported in Havana, Cuba, in 2016.

While the U.S. has yet to publicly assign a cause or culprit for the symptoms, top officials and scientists are increasingly confident that they are the result of directed-energy attacks by a foreign government — likely Russia, according to intelligence officials — and the Biden administration has been providing weekly updates to the congressional intelligence committees.

The State Department’s apparent understanding in 2018 that Lenzi’s symptoms could have been caused by directed energy came two years before a National Academy of Sciences report declassified and published in 2020 concluded that “directed, pulsed radio frequency energy” was the likely source of the ailments. The number of suspected attacks on diplomats and CIA officers has risen substantially in the past year, and have been reported on every continent except Antarctica.

The new documents do not detail the scientific analysis underpinning the medical examinations. But lawmakers from both parties have accused various executive branch agencies of holding back critical information about the government’s investigation into Havana Syndrome, especially during the Trump administration. In the meantime, some skeptics have asserted that the symptoms are the result of a psychogenic illness, exposure to chemicals or a specific species of crickets — though the latter has since been discounted.

Medical experts and intelligence officials have said publicly and told Congress in the past year that the symptoms likely stem from a directed-energy attack on the individual, or an effort by a hostile foreign government seeking to steal data from the target’s devices.

President Joe Biden’s national security team has placed a renewed focus on the mysterious incidents, with CIA Director William Burns taking the lead in a government-wide effort that was largely non-existent during the previous administration. And Biden recently signed bipartisan legislation, the HAVANA Act, to expand victims’ access to medical treatment for their symptoms, which include piercing headaches, memory loss, dizziness, intense ringing and pressure in the ears, and even permanent brain damage.

A senior administration official reiterated the White House’s position on the source of Havana Syndrome — that the intelligence community is “actively examining a range of hypotheses, but has made no determination about the cause of these incidents or who is responsible.”

After Lenzi began experiencing symptoms of the mysterious ailment in China, he and 40 other diplomats in China and Cuba were given a series of tests called the Havana Acquired Brain Injury Tool, or HABIT, which were developed and administered by State Department medical personnel.

The State Department describes the HABIT tests as “a clinical assessment tool designed with clinical researchers to evaluate medical findings associated with directed energy exposure in certain foreign environments,” according to copies of two HABIT disclosure forms dated June 1, 2018. The series of exams, administered by State Department doctors, test the patients’ brain function and eye movements in order to determine whether a brain injury has occurred.

The 41 diplomats who failed the HABIT tests — 26 from Cuba and 15 from China, including Lenzi — were medically evacuated and sent for additional testing at the Penn Center for Brain Injury and Repair at the University of Pennsylvania in Philadelphia.

When asked about the HABIT test, the State Department spokesperson said the department “for the last several years has utilized a tool that comprehensively evaluates reported anomalous health incidents in neurological, cognitive, vestibular, auditory, and visual domains.”

The spokesperson said the 2018 test and its mention of directed energy “do not align with the department’s current medical evaluation procedures.”

“The department’s current medical assessment has evolved since 2018 with expert guidance from medical providers who have cared for patients since 2018,” the spokesperson added.

Lenzi enrolled in a University of Pennsylvania research study titled “Investigational Link Between Uncharacterized Environmental Exposure and Acquired Brain Injury,” on June 20, 2018. The study was led by Dr. Douglas Smith, a neurologist at the school’s Perelman School of Medicine, and at the time was sponsored by the U.S. government, according to Lenzi’s enrollment forms. It was to stretch for five years, and include a number of blood draws and MRI scans.

But just two months later, the U.S. government was no longer listed as a sponsor. A consent form dated Aug. 24, 2018, stated that the study was sponsored by Penn’s Department of Neurosurgery.

The State Department spokesperson declined to address the change directly, saying only that “we never pulled funding from a Penn study” and “the department continues to engage interagency partners, academics, and scientific experts on mitigation efforts.”

Lenzi was diagnosed with a brain injury on July 22, 2018, by Dr. Teena Shetty, a neurologist at the Hospital for Special Surgery in New York, according to the documents he provided. Shetty recommended additional treatment, as well as physical restrictions such as refraining from sports and exercises and avoiding reading and screen time.

Since then, Lenzi says, the State Department has retaliated against him in a number of ways. Documents viewed by POLITICO show that the department most recently yanked his administrative leave last month — forcing him to use sick leave or leave-without-pay to participate in medical studies and attend therapy sessions — and has denied him access to his classified computer system, even though he retains his top-secret security clearance.

Lenzi said he has accrued 1,248 hours of administrative leave over a two-and-a-half-year timeframe — about 156 working days.

He expects the OSC investigation to be completed before the end of the year. At that point, by law, the results would be shared with the White House and Congress. If Lenzi’s allegations are substantiated, he would be considered a whistleblower under the statutory definition, and he would be entitled to protections under the law.

In the meantime, the State Department is warning victims that it could be months before they see the benefits of the HAVANA Act. In an email obtained by POLITICO, the department’s Bureau of Global Talent Management wrote that the new law “will have to go through the federal rules-making process, which is lengthy, and requires consultations and clearances with multiple other federal agencies.” The email also states that the funding for the HAVANA Act must come from a congressional appropriation, which has yet to reach Biden’s desk.

Members of Congress have taken an interest in the mystery surrounding the illness since 2016, when it was first detected among U.S. diplomats serving in Havana. But congressional oversight activities skyrocketed this year after officials from across the government began warning lawmakers that diplomats, intelligence officers and other American personnel are being targeted with increasing frequency both on foreign soil and the U.S. mainland.

As a result, individual lawmakers have engaged directly with the victims, including Lenzi, as part of their oversight of the government’s handling of the matter. One of those lawmakers, Collins, has talked extensively with Lenzi and called his retribution claims “truly horrific.”

“His story is very compelling and sadly far too typical of those individuals who have suffered through and are enduring the consequences of the pulsed energy attacks that lead to Havana Syndrome,” Collins, a senior member of the Intelligence Committee, said in an interview.

Many victims are hesitant to go public or even speak privately with congressional committees that are investigating the government’s response. Lawmakers attribute their reluctance in part to the State Department’s slow response to the increase in suspected attacks. The CIA, meanwhile, has begun to treat the subject more seriously, especially during Burns’ tenure.

“The State Department still has lagged the CIA in providing the health care and compensation that these individuals need and deserve,” Collins added.

Burns has taken action to remove individuals from the CIA’s medical office who aren’t treating the issue seriously, according to two people familiar with the moves. A CIA spokesperson said Burns “has made changes in our Office of Medical Services from his first day on the job, elevating a doctor focused on patient care to lead our efforts caring for affected individuals, and also tripled the number of medical staff focused on” the matter.

By contrast, the State Department’s task force on Havana Syndrome was, until recently, led by Pamela Spratlen, who had lost the confidence of many of the victims. In a recent phone call with victims, for example, Blinken and Spratlen were grilled about several topics, including the department’s reluctance to publicly refer to the incidents as attacks, as well as its tiptoeing around the “mass hysteria” theory that the victims and intelligence officials roundly reject.

During a visit to Colombia last week, Blinken met with American diplomats at the U.S. embassy in Bogota who have been impacted by Havana Syndrome. The State Department under Blinken has sought to highlight the secretary’s interactions with the victims, as the Biden administration seeks to revamp its public-facing response to the incidents.